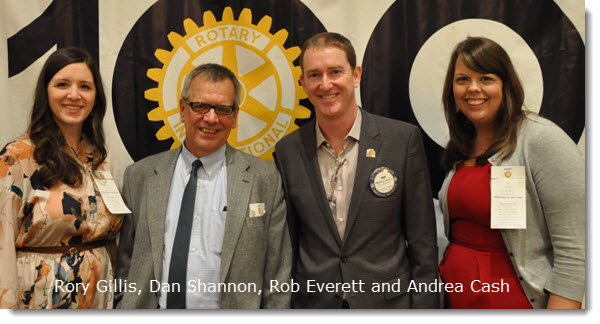 Several years ago my friend and fellow Rotarian, Steed Rollins, asked me to take a turn at being the “reporter” who composed a little recap of the meeting program for publication in the weekly Bulletin that was distributed at the following meeting. I did it a few times after that and quickly determined that nobody, and I mean nobody read these. I’m a terrible procrastinator and a worse note taker so I often had to go beyond just reporting and offer impressions I had about the program or the speaker. After a while, I’d get a complement occasionally and then someone asked me to take over the website. I agreed to do it if I could rebuild it using WordPress, which is open source free software that I had learned to use to build what are called “single property” websites. These are something that I build for most of my real estate listings.

Well that was four or five years ago.  I’ve written well over a hundred of the reports and I now have a team of very good writers that rotate with me.  I’m pretty proud of what we’ve put together on the website.

One of the things that makes it fun is that the program committee of the club gets some very good programs.  Steed has recently taken over the leadership of this committee from Rob Everett so I’m sure that will continue. Many times I’ve wondered how we could share some of these reports with a larger audience than the club members, especially ones with a strong Durham connection. The Herald-Sun will occasionally run something but that is a hit and miss proposition and sometimes I wonder how much readership they have for this kind of thing anyway.

This is one one reason for creating Ordinary Durham and the Facebook page for it that I put up yesterday. Ironically, the last write-up of a program I did was given by Dan Shannon, who is the CEO and founder of Durham Magazine.  I say that because, as a “lifestyle” magazine, Durham Magazine focuses on the “cool” part of Durham which this blog concedes to them and several other well established sources.  Dan himself earned his spurs as a “print guy” and publicly laments the rise of internet media.  This may be a little feint because Durham Magazine is deeply in it with their website, Facebook page and other social media. This even includes a podcast that they began recently.

With that explanation, I invite you to click on over to the write-up of Dan’s program at DurhamRotaryClub.org.  Feel free to subscribe to the Club’s website if you like.  There is no obligation and the only thing you will get is a weekly email summary of the stories that have been posted the previous week. The list is not used for anything else and never will be.