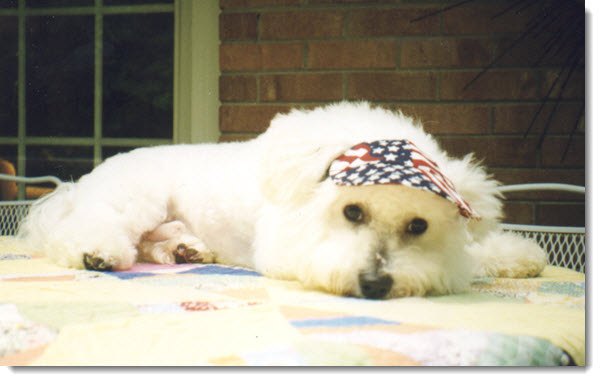 I lost a good friend a couple of weeks ago.  He would have been eighteen years old if he had lived until early November. That means he spent more time living under the same roof with me than any living creature except maybe my parents.

I tell people that Dusty was a rescue dog even though he was a purebred Bichon Frise that my last ex spent a lot of money on to surprise me on Christmas day in 1997.

I was not pleased. Even though I had considered getting a dog from the pound, I had dismissed the idea because we were both working long hours in Raleigh. I don’t care what the experts say, I can’t believe it’s right to leave a high-energy puppy by themselves in a crate for eleven or twelve hours a day

I grew fond of Dusty but my wife did not. Bichon’s don’t shed on your furniture, which may be the primary reason she gave a big ugly ex-jock such a frou-frou dog.  But they do pee and poop and if you can’t put up with that for a while, get a cat. The fact is I already had two cats, one of which I buried just three or four years ago when she died at 20 years old.

I tell people that Dusty was a rescue because my wife was so displeased with him that I got an ultimatum that it was the dog or her.  That’s true, but it’s not fair to her or Dusty.  She was not the last woman to accuse me of caring more for animals than people and there was a lot more going on that split us up.  Still, my reaction to that accusation has been that I’d rather be charged with that than caring more for furniture than animals.

When she left me to stay and sell our Forest Hills home, one of my acts of defiance was to let Dusty sleep in the bed with me instead of the crate where he slept his first couple of years. That remained the case most nights including the last one of his life, which was a Sunday. We knew it was coming but the previous Friday he had rallied a bit, ate some chicken and peed when I carried him out to the yard. But that night he kept waking up crying loudly. At first I thought he was in pain but all I had to do was reach out and scratch his shrunken back and he would settle down. Disorientation, frustration, fear…maybe.

I made the call first thing Monday morning to Colony Park Animal Hospital where he has been taken care of his whole life for an occasional ailment and a lot of grooming. One reason I’m sharing all this on a Durham blog is, for all its coolness, Durham has always had such ordinarily wonderful institutions like Colony Park.  By mid-morning it was done.

I admit I cried like a baby, just like I did a few years before when they helped usher Bix, the cat, out of this world too. They probably go through this every day but they still couldn’t have been any more compassionate and caring, especially Joyce McKinney, who is not only a great vet but a Rotary buddy and leader.

So what now? My sister recently had to put down a true rescue mutt that became a favored pet in her home. She found Lucky under her backyard shed, starving, dirty and matted. She was apparently an abandoned puppy mill mom. My sister asked me if I missed Dusty while not missing him at the same time. I had to admit it has been a bit of a relief not to worry or provide the extra care and clean up all the stuff again as Dusty had more and more “accidents.”

It’s not like I’m without furry company.  I’m living with my daughter and grand-daughter who brought along their dog Luna, who is even more frou-frou than Dusty. And there are Bax and Lil, two cats who are siblings and true rescues who came to me through my sister.

I’m not sure I believe in an afterlife but my personal fantasy is that pets reincarnate and eventually find their way back to you when you’re ready for them.  I’m pretty sure Bax and Lil are the reincarnations of Bix, and her brother George, who unfortunately disappeared many years ago. 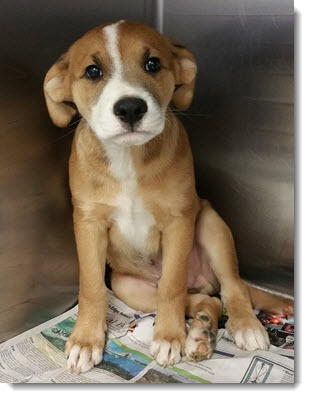 A friend of mine who now lives in Atlanta is one of those passionate folks working hard to save shelter animals.  She posted the picture here on Facebook yesterday. I found myself sitting in the dark late last night staring at it on the screen for a good twenty minutes.  There are guys like him in shelters all over the country including right here in Ordinary Durham that will die young and never have anyone cry for them or give them a name.

Dusty, I feel you stirring around out there somewhere. Come to me.