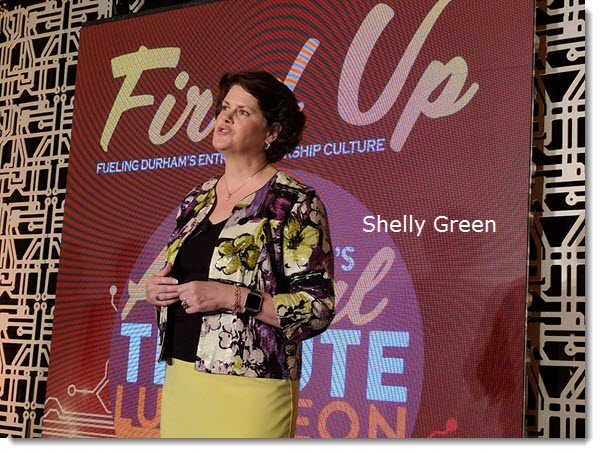 I’ve lived in Durham since 1984 when I took a job as the marketing director at the hometown bank. My office Downtown was in the building that is now the 21C Museum and Hotel. Back in those days the Downtown had not hit bottom yet, but it was close.  Both Liggett and American Tobacco were still operating their cigarette plants and many mornings you could still catch the sweet smell wafting from those plants, a smell that was familiar from the two other places I had called home, Winston-Salem with RJR and Richmond with Phillip Morris.

I liked Durham then and I like Durham now. When my friends and family in Richmond would ask me to describe Durham, the word that would come to mind would be “texture.” Not too smooth and not too rough but always unique.

The Durham ecosystem has changed considerably over those 30 plus years, but I think that is still a good description. Durham’s institutions make an interesting mix.

My last post was about the Durham Democratic Party Convention held at Shepherd Middle School, that, despite the best intentions to be organized, had a rambling, almost ad hoc feel to it that nevertheless underpins, arguably, the most progressive community in the state.

Less than two weeks later I attended the annual Tribute Luncheon of the Durham Convention and Visitor’s Bureau. Although most of the elected politicians that attended the Convention were also in the huge Convention Center Ballroom for the event, that’s pretty much where the similarity ended.  Every minute was rehearsed and choreographed. It began on time and ended on time. If you wanted to schmooze or network you were encouraged to get there early or you could hang around after.  Everybody had an assigned table on their ticket and the lunch was more than adequate for this kind of event (steak and chicken) and was served promptly and the plates cleared efficiently before the program began.

A good deal of the crowd is from the hospitality and tourist industry that are the primary beneficiaries of the efforts of the DCVB but the organization positions itself as the community’s marketing department. Most of the good press that Durham gets, has gotten a nudge and often more from their efforts. The recent Vogue article Why Durham Is North Carolina’s Hippest City is an example of the DCVB working closely with the writer. 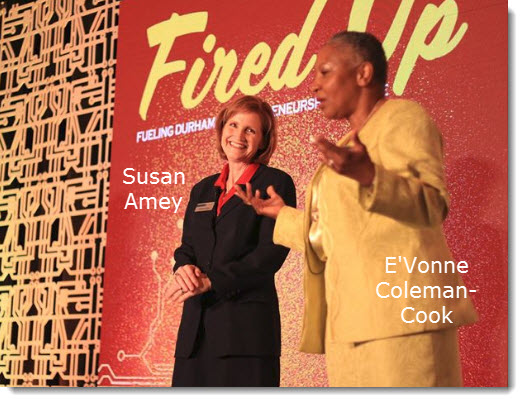 The primary reason I go to this event is my admiration for Reyn Bowman who has retired and his successor Shelly Green. Reyn came to Durham about the same time I did to take over the DCVB and make it an effective, data driven marketing organization. Reyn’s portrait is one of three hung in the Convention Center giving them credit for much of the revival of Downtown.  Shelly’s picture has not been hung on the wall yet, but she is pictured above getting things started with her brand new Marketing Director, Susan Amey and Chief Operating Officer E’Vonne Coleman-Cook, who old timers will remember for her leadership of the Durham Arts Council for many years.

Every year has a theme and this year it was a celebration of Durham’s start-up culture. The program had two parts. The first was a video produced by Growler Visuals’ Wil Weldon who is a Dukie and does a lot of this kind of work very well and who I convinced once to do a real estate video.  His co-creator on this project was Saleem Reshamwala of KidEthnic. This is the seventh year in a row that Growler has been involved with producing the video. You can see the video below. His website is here.

The second part of the program was a keynote by Chris Heivly, a very interesting guy who may be known best as the founder of MapQuest and who is very involved in our local start up community.  He’s also a pretty good storyteller. He began by asking the audience to use their imaginations to remember what it was like when they were 10 years old and we got the bug to build a fort. You didn’t write a business plan, construct a flow chart, hire an architect or any that stuff, you just went and started grabbing pieces and putting them together.  The point, of course, was that was how a lot of entrepreneurial ventures get off the ground.  He then went on to describe how MapQuest began by seeing if computerization could improve on those trip plans older folks will remember you used to be able to get from auto clubs like Triple A. 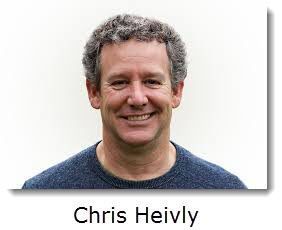 I thought that analogy was a little sexist until I got home to find that my 5 year granddaughter had built a fort in my living room with the cat tree, a couple of chairs and a sheet. In other words, boy or girl, before you got your MBA, you didn’t overthink it, you just started putting it together with whatever you had at hand. Once you’re into it, the second iteration is better than the first and on and on you go.

Great advice in a city that still has texture.