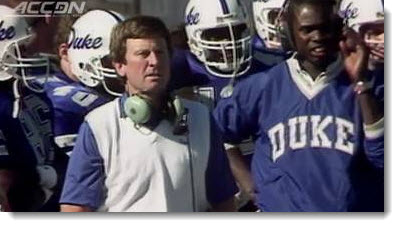 Good exercise, cooler weather, and helping to raise a 4-year-old granddaughter lead to very sound sleep for me…with really weird dreams.  Earlier this morning my dream was a new variation of my corporate nightmare where I’m employed but nobody will tell me what to do or where to do it. This time the twist was that I was employed by Duke University football coach Steve Spurrier as a prep squad blocking dummy. I had been hired because of my experience in that job at Notre Dame but a budget cut at Duke eliminated the position and Spurrier was frustrated trying to help me get out of my dorm room/office and get back to his coaching.  Weird.

One of the weird things about this dream is that Spurrier and I are the same age. In 1966 the Notre Dame team I was on (as a blocking dummy) won the National Championship. That same year Spurrier won the Heisman Trophy at Florida. I met him and his wife during his tenure as Duke’s coach during a Duke Children’s Classic event and got a chance to observe a couple of the Duke practices when I used to use the Duke track for exercise. I remember thinking he would have been a fun guy to play for and his Duke teams were very successful.

I also recall that Spurrier teams filled the stadium. In my early years in Durham I lived in American Village and a group in the neighborhood got together to tailgate in one of the open fields around the stadium and go to the games. It seemed like the entire community was there.  For years I had season tickets and lucked into an Iron Dukes parking pass that a friend didn’t use and enjoyed the pre-game stuff then too.  In fact, it seemed to surprise people that I said I preferred to attend a Duke game than a Notre Dame game.  It’s all about logistics and comfort. During the down years between Spurrier and the current coach, David Cutcliffe, it was relatively easy to get in and out of the stadium, sit anywhere you wanted, get a coke or go to the restroom without waiting in a long line as the football got worse and the crowds dwindled. More often than not the weather was great and I could get home in time to watch Notre Dame on television. Occasionally you would also see some good football players when Florida State or Virginia Tech came to town.

I really admire Cutcliffe even though his droll demeanor is in stark contrast to the volatile Spurrier. Not only has he brought back good football to Duke, he has done it the right way. Two notes on that front. I had a chance to hear the coach speak recently at a Rotary meeting and ask a question at the end.

My question had to do with the quirk in the eligibility rules that allows graduates with a year of eligibility left a sort of free agency to transfer to any school and play without sitting out a year. I was kind of hoping that Notre Dame grad Everett Golson would come to Duke and light it up in his bonus year under a Coach with a reputation for developing quarterbacks like Peyton and Eli Manning.  His answer illustrated both integrity and wisdom. He said that when they recruited a player and told them that if he came and worked hard he would have a chance to play and contribute, they meant it. Bringing in ringers for one year might prove beneficial in the short run it was not good for building a sustainable program that wins consistently.

Further evidence of this was in the paper this morning.  The story was about the dismissal of three players from the team who couldn’t/wouldn’t follow the team rules. Sports fans will note that Coach K dismissed a player from the basketball team last year for similar reasons. Since the lacrosse scandal a few years ago, Duke seems to have made a decision that it will not only graduate the vast majority of its athletes, they will be good citizens. That’s good for Duke and good for Ordinary Durham. 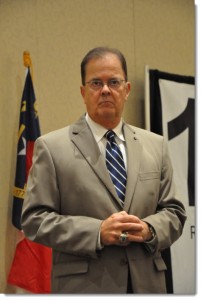 What Duke and Coach Cutcliffe have not been able to do is fill Wallace Wade Stadium consistently. In 2014, which was an historic season, Duke’s average attendance was down 7.5%. Wallace Wade is one of the smallest stadiums in the ACC and it only filled the stadium to 77% capacity.

First, Duke is small relative to schools like UNC and NC State and its alumni base is much more scattered. So the most natural fan base is less available to fill the stadium.  However, Duke, including the Medical Center is by far the largest employer in the region. Duke must exploit that and somehow make it the community’s team as well.  It can if it becomes as cool as the Durham Bulls.

Second, and closely related is ticket pricing. Filling the new luxury boxes may solve some of the financial issues but filling the seats with rabid fans is going to require some creative pricing.  I don’t just mean packages, I mean lower prices.  One of my bosses in banking years ago used to talk about the salami pricing strategy, increasing them one thin slice at a time.  Every dumbass drug dealer in the world knows that you have to get the user hooked to keep them coming back. I was always mystified that even though I bought seasons tickets for many years (at what seemed a reasonable price) after the first time I stopped I was never directly solicited again. When I looked up the prices when my interest was revived, I had sticker shock.

Third is logistics.  The last Duke game I went to without an Iron Duke pass, I ended up parking on Cranford Road and hiking a mile or so to the stadium. The expansion of facilities around the stadium have made it more and more difficult to tailgate unless you have an Iron Duke pass or a friend that does and plays the host. Ironically that day a good percentage of the Iron Duke parking spaces were not being used.  Maybe the massive parking deck being built across from the Washington Duke will help with the parking but not with the tailgating experience.  Shuttle buses from strategic spots like DBAP maybe?

I don’t know how to solve the problem or if it really is a problem but I do believe that sports can be a great community builder that gives people of every race, creed, education level and even gender a mutual interest to share.  When it happens, Ordinary Durham will be the better for it.