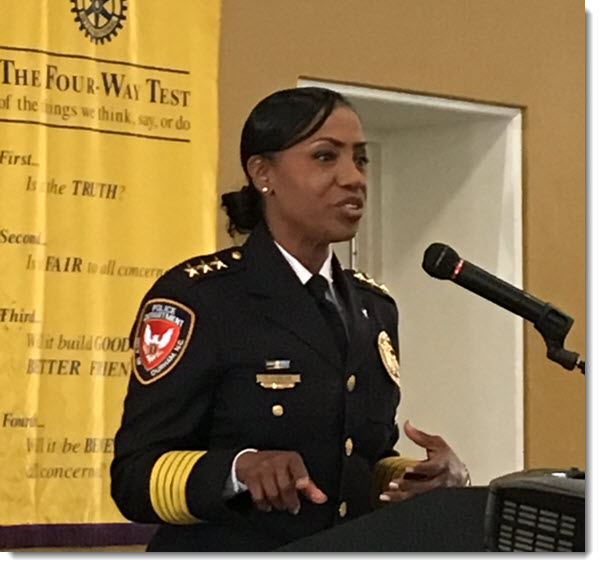 This is a slightly edited version of a write up I did for the Durham Rotary Club website. Durham is cool but even the coolest communities need a police force. Durham’s is evolving once again.

I’m not a native but I am starting my 33rd year in Durham and anyone that has been around that long has watched a lot of police chiefs come and go. I’ve come to believe that being a police chief is like being a Division One football coach. A few tough losses and no matter how well you’ve done before, people start calling for you head.

When police chiefs hit a rough patch the same thing seems to happen even if they have made good progress over a number of years. You could see it coming with Chief Lopez, who had to deal with complaints about what were described by a local judge as “pretext stops” in a question today to new Chief CJ Davis.  And then there was the unfortunate death by gunshot of the young man in the back of a police cruiser at police headquarters. It didn’t go unnoticed that Chief Lopez started coming to meetings more frequently, even bringing all his division captains with him one time and his new communications (PR) guy with him another.

The new police chief, CJ Davis, was introduced by the program chair who shared his obvious relief that Chief Davis responded so quickly to his request to do the program when the originally scheduled speaker cancelled. Chief Davis said she was happy to do it, “even if she wasn’t the first choice.”  Of course, she would be welcome anytime but the quip began to form the impression that she understands that the best way to hold the job and build on the progress that has been made by the police department takes deep and sustained involvement in the community. You can’t begin banking the goodwill that you need to get over the rough patches too soon. She even began by complimenting our hosts at TROSA and the meal they provided (wonderful lasagna), and praising the courage of another member for the remarkable Rotary Minute that she had just given. There was even a picture from the Rotary Walk for Polio organized by Geraud Staton in her presentation.

Chief Davis also made it clear that community involvement meant much more than schmoozing the Rotary Club. She emphasized that being part of the community was the responsibility of everyone in the Durham Police Department. She also said she wouldn’t have come here to take the job if she thought the department was full of losers and then got down to describing some of the changes, some already in the works, and others on the drawing board, to improve the overall performance of the department.

She talked about finding “home grown” officers, signing bonuses, relocation bonuses, and mentoring and coaching from bottom to top in the organization. She described persistent problems with robberies and setting up Robbery and Aggravated Assault units to focus on that. She told us about appointing special liaison officers for the LGTGQ and Hispanic communities and the need for more training in de-escalation, racial equity, implicit bias and dealing with mental illness. She talked about diversion programs to help young offenders avoid a police record and all that implies.

Chief Davis shared that she was born in North Carolina when her father was a member of the 82 Airborne Unit at Fort Bragg. She is one of six children in a family that followed her father from assignment to assignment. She has 30 years of police experience and came up through the ranks in the Atlanta Police Department. She noted that Durham’s explosive growth reminded her of Atlanta after the 1996 Olympics and how that challenged the Atlanta PD to keep up with the growth. It was mentioned that she is the first African-American women to hold the job of police chief in Durham. Thirty some years ago when I became a citizen of Durham that might have raised some eyebrows, maybe even some concerns, but now seems nothing more than an interesting footnote to her career. We welcome her to Rotary and the Community and wish her well. A full resume for Chief Davis is here.

I’ve got to say that my close involvement with the police when my home was burglarized  a couple of years ago (first and only time in 32 years) had a few rocky moments at first but they actually recovered part of what was stolen and jailed the guy that fenced the stuff. What I finally concluded though was that they were a hard working bunch of men and women but it’s taken me until now to understand what Chief Davis was talking about when she mentioned the explosive growth of Atlanta after the Olympics. As with so many things in government, you’re always playing catch up. Even if you reduce the rates of crime, a growing community still has to anticipate the need for more police and courts and other elements of the justice system.