You are here: Home / Places / The Troubles at UNC-CH Right Down the Road

If you are wondering why I’m putting a video about UNC-CH at the top of a post in Ordinary Durham, here’s the explanation.

I’ve been a member of the Downtown Durham Rotary Club off and on, mostly on, since the mid eighties.  This year it is celebrating its Centennial year and because so many of its members are or have been movers and shakers in the community and beyond it is a great place to get to feel the pulse of Durham, both cool and ordinary.

For the past several years I have provided many of the write-ups of the weekly programs that so distinguish the club. On January 12th  I was pressed into service to write up the presentation by Joel Curran, who is the 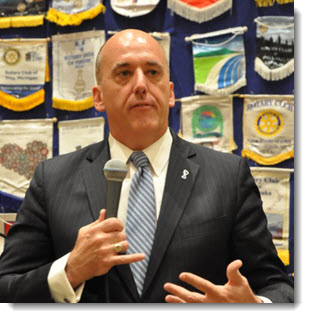 new Vice Chancellor for Communications at UNC. He started in December and it was kind of amazing that he would be out doing this kind of presentation this early in his tenure since UNC is dealing with one of the more difficult public relations problems that it has had in recent memory, the so-called “paper course” scandal.

I kind of wanted to avoid writing this one because I think “scandals” like this are blown way out of proportion and have made my opinion known publicly as a guest columnist in the Durham Herald-Sun. I even defended the Ethics Professor at UNC that was guiding students into the phony courses.

In thinking about how to introduce the write-up I jogged a memory of an Ethics professor at Notre Dame who gave a boost to me.   There was never anyone as naive and unprepared to be a college student to enter those hallowed halls.

Anyway, I did the write-up and it forced me again to recognize that even though Durham and Chapel Hill are often considered rivals, they also help define each other in a good way and the synergy of the area’s three major research universities helps make Ordinary Durham such an extraordinary place to live.

If you are interested in the write-up, here’s a link.