You are here: Home / Reflections / Why Service Clubs Matter 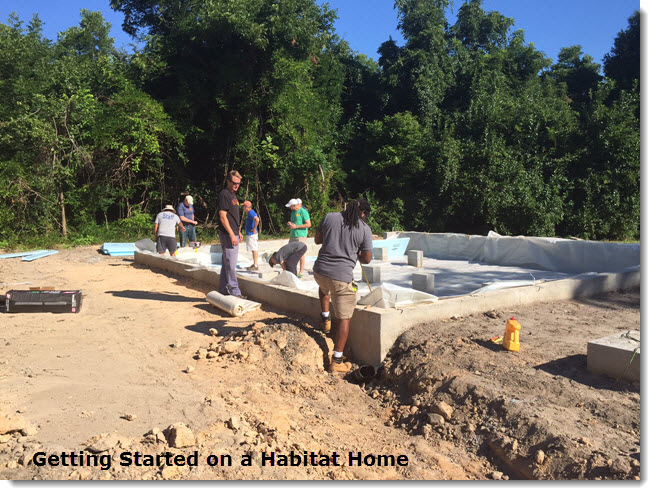 I’m not really a joiner and when my boss “suggested” that I join Rotary back in the late 80’s, I thought, okay, a free lunch on Monday isn’t the worst thing in the world since the company agreed to pay for my membership. But I soon learned that it takes more than being a member of a club to be a Rotarian.

One Saturday morning, I was among a group of Rotarians from the Downtown Durham Rotary Club who showed up in work clothes to pick up hammers to help build a Habitat home the Club was sponsoring in East Durham. Skill levels spanned a wide range. For some I’m sure it was the first time they had ever tried to drive a nail to accomplish anything more complex than hanging a picture.

It wasn’t long before it occurred to me that we could have all chipped in the cost of a fast food lunch and hired a couple of experienced framing carpenters with nail guns and get twice as much accomplished. True as that might be, it misses the whole point. Like most know-it-alls, it took me a while to understand this. Now that I do, I see the pattern repeated over and over again. It is driven by some collective wisdom built into civic clubs, Rotary, Civitan, Exchange, Kiwanis, Lions, whatever, as well as churches and fraternal organizations.

The Rotary motto is Service Above Self.  With Habitat you work side-by-side with the family that will eventually live in the house. Just being on the scene makes community dynamics much less abstract and less scary. Ditto with Rotary’s Reading Ranger tutoring program at Y.E. Smith, or helping out at Urban Ministries, the Senior Center, the Rescue Mission, the East Durham Childrens Initiative; all open your eyes to the humanity of everyone in this diverse community.

The Durham Rotary also has an active International Committee with close ties to Durham’s Sister Cities Program. It partners with other Rotary Clubs in Durham, our Rotary District, and around the world to pool resources and undertake significant projects, most of which deal with public health or literacy.

There is a personal feel-good aspect to this involvement as well. The fellowship and chance to make friendships is enormous. But the subtext of “Service Above Self” could be “give a little service, gain a little self.”  I can’t tutor anymore but I happened to be at Y.E. Smith last week and ran into the third grader I tutored twice a week last year. The way his eyes lit up in recognition and greeting made it all worthwhile.

But this is just the salt and pepper on your veggies that enhances the flavor of those powerful nutrients. The staff and teachers tolerate us messing in their business at Y.E. Smith and the foremen on the Habitat homes patiently teach us how to drive nails because it brings us into their world to increase understanding and garner support. And it’s not just our personal time or financial help. They understand that they are building community support for electing good officials, bond issues, school budgets, affordable housing initiatives and a host of other things that only our governments can effectively take on.  Civic Clubs take us from helpless to helpful and gives us a perspective that magnifies our voice in the community.

The Durham Rotary Club just completed its Centennial Celebration. It is the second oldest club in the state and the largest in our district. The theme of our Centennial Celebration was “100 Acts of Service” but we logged over 3000 acts and raised over $260,000 for both local and International projects and scholarships. Every one of the 200 plus members of the club participated in some way.  The intent of the organizers was to prime the pump with funds and exposure to a wide range of service opportunities.

The year began with a kickoff party that included the announcement of the necessary financial commitment in a pledge from Rotarian Dr. Andy Barada and his wife Placide to build another Habitat home. Andy, who could wield a hammer with some skill and did on other Habitat homes, tragically died during the year.  At the Gala that ended the Centennial we celebrated at the beautiful C21 Museum Hotel Downtown with the family that purchased the home and later in the week dedicated it in a ceremony at the home on Plum Street. It was a happy event. Life in Durham can be really good.