You are here: Home / Uncategorized / Monuments 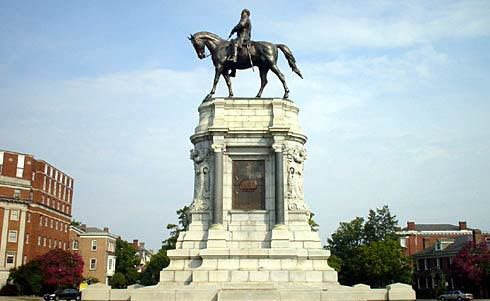 My brother was born in Albany, New York and I was born in Richmond, Virginia where we grew up. He would play the Yankee and I would play Johnny Reb in our own war games completely oblivious to the nature or causes of the Civil War. Neither of my parents had deep roots in the south or its culture but for most of my youth I lived within a couple of blocks of Monument Avenue and regularly passed the Civil War monuments that have given it the reputation of being one of the grandest avenues in the world.

When I visited my sister in Richmond over the years I would take the slower route back to Durham by driving down Monument and picking up I-95 downtown, just to take in the monuments and the magnificent homes that line the avenue.

If I ever write my memoirs perhaps the most significant chapter will be about my personal awakening to the history of African-Americans in this country and especially in Richmond. One of the “Oh My God” moments was meeting a man by the name of Willie Lanier, who had graduated from one of the two “Negro” high schools in Richmond and eventually was inducted into the pro football Hall of Fame. We are the same age and how I met him is a longer story, but he shared with me some of the disappointment he and his high school teammates had felt when plans for a post- season game between my high school football team and his were stymied by city officials because of a fear of riots.

This preamble is to help me explain why I am very ambivalent about removing these or any other civil war monuments. During all those years growing up and waking up to the evils of slavery, I never heard anyone, black or white, attach much significance to these monuments. That’s true in Durham as well. I’ve been here over 30 years and never heard a word, pro or con, about the statue that was pulled down in front of the old court house. I passed it many times but never bothered to read the inscription on it. For all I knew or cared it could have been a monument to Revolutionary War soldiers.

I’d be willing to bet that if it had any significance at all to most people of all races in Durham over the years, it was just that of a relic of a bygone era. I had no idea it was a relic of the Jim Crow days erected long after the Civil War ended.

I don’t think I know anyone that will miss the statue in Downtown Durham although I’m a little embarrassed that a rowdy crowd pulled it down with the gusto of drunk vandals. There’s a right way to do these things and that’s not it. If any good came out of it, it pulled some history out of the dusty stacks to remind us that we were imperfect then and still have a ways to go to racial tolerance.

Richmond is a different story. The Lee monument is a real work of art and was erected before the turn of the 20th Century.  I’m sure there are some that will still see it as an affront glorifying a terrible time in our history. Maybe there are still some who feel the same way about Stonehenge. Some may also think that the symbolism is important. I don’t. I would much prefer that the focus be less on symbolism and on more tangible problems such as affordable housing, community policing, equal education and job creation. And, of course, there’s the evil heir of Jim Crow, voter suppression. Let’s protest and attack that, not some relic of the old man.