You are here: Home / Uncategorized / Peanut 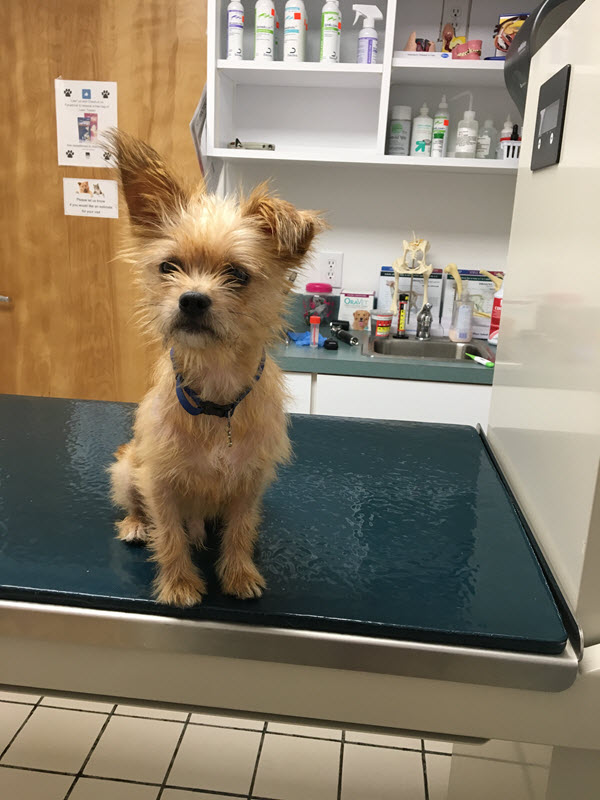 The fantasy…  When we lose a dog that has been a long-time companion, he or she crosses the “rainbow bridge” to doggie heaven and we only have to wait for its reincarnation for it to show up in your life again. I’ve hung onto that fantasy, even though in the back of my mind I’m pretty certain that the reality is something different.

My dog, Dusty, as much as I loved him, slowly went downhill in his 17th and 18th years. He walked less, played less, slept more and was embarrassed as the “accident rate” increased and mortified when in his last days had to be carried outside to pee.

As he was mercifully ushered onto that bridge at the vet’s office, there was a surprising sense of relief. My sister shared with me she felt the same way when the small foundling dog that she discovered under her shed, matted, hungry and shivering finally died after many years as her pet. Conjecture was that Lucky was an abandoned puppy mill mommy.

Not too long ago I decided that maybe even if it wasn’t a reincarnation, I’d have to start looking more actively and not leave it to Dusty’s soul to find me. During my wait, a dear friend in Atlanta, who is actively involved in finding homes for dogs was posting pictures on Facebook from shelters all over that part of Georgia, nudging me a little bit with every post.

In April, Shafonda Davis, the Executive Director of the Durham Animal Protection Society, visited the Durham Rotary Club to explain their mission and operations. The gentle nudges were becoming shoves. Doing the research for a write up I did of that program, I visited their website and then started doing it habitually long after I’d finished writing.  It’s not like I didn’t already have pets in the house.  My daughter and grand-daughter live with me and they came with Luna, who is a Teacup Yorkie. I also have two cats who I adopted from an acquaintance of my sister, who couldn’t keep them for medical reasons. But the feeling was still there that Dusty was out there somewhere waiting to be found.

A few months ago, I started a clean-up project around the house and was making a regular run to the dump, which happens to be next door to the APS shelter. Not worried about smelling too bad, I started dropping in to get the lay of the land, and see who was available. The problem, expressed by many people I’ve talked to, is choosing. It can be a little sad to walk from cage to cage and see all the potential love, eagerness to please and, in some cases, the signs of poor care, and know that many will not leave alive. A shelter like APS, must accept any animal brought by the animal control folks or citizens, in whatever condition and for whatever reason and there is no way to save them all.  I did learn from Ms. Davis’ presentation that it’s getting better and better in Durham. There are two primary ways to make sure that continues to improve. The first is aggressive promotion of adoptions…”don’t shop, adopt.”  The other is to aggressively promote spaying and neutering our pets. None ever leave the shelter, as they say, “intact.”

Dusty was a Bichon and that’s about as big a dog as I wanted and a lot of the dogs at the shelter are on the large side. Several times I requested to “visit” with one of the dogs only to find out that someone had just put a deposit down. One Saturday I brought Steph and Maddy, my daughter and grand-daughter, with me. We spotted someone we wanted to visit with and even filled out an application only to find out the one we were interested in was already taken. We went home disappointed. I don’t recommend going on Saturday if you intend to adopt. It’s kind of crazy. I folded the application and stuck it in the console of my truck. 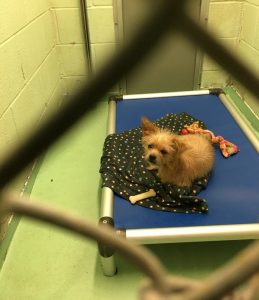 Several weeks later, on a Friday I was getting tired of looking at all the prospects online…and not just on the APS site but several other rescue groups that are in the area. I hopped in the truck and went over to the shelter without stopping first at the dump.  I was surprised that there were a lot of empty cages.  It turned out they had had a fee free adoption weekend and found homes for a lot of the former residents. I was a little discouraged but there was a small terrier mix of some kind that I decided to visit with.  I didn’t know it then but that would be my first and last “visit.”

The procedure is that you fill out the application and then you visit in a cage behind the cage.  I already had my application in my pocket. One of the attendants led me back there, gave me a hospital gown and latex gloves and closed the gate after I went in. There’s a rope in the front they use to open a door between the front cage and the back, but this little fellow was afraid to go through it. So the attendant got a leash and walked him around to the gate in the back. In the meantime, I folded myself up (I’m a big guy with bad knees) and slumped down to sit on the damp concrete floor. 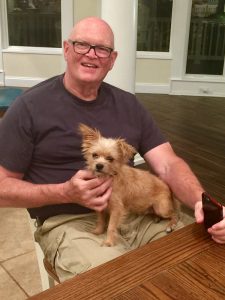 The little fellow still didn’t want to join me and had to be lifted into the cage.  When I beckoned however, he walked over and crawled into my lap and laid his head on my chest, his fan of a tail wagging furiously.  I still tear up just thinking about it.  We visited for about 10 minutes and I knew what I needed to do. When I stood up to leave he leaned against my leg, like “you’ve got to take me with you.”

Of course, you can’t do that. There’s a three day wait while they check you out. With the paperwork, they handed me a book on what you might expect when you adopt a dog that is not a puppy. They thought this one was 3 or 4 years old and had been surrendered because he didn’t get along with the other dogs in the home and had to be left alone in the house for many hours, blah, blah, blah. He was flea bitten and his right shoulder was one big scab, but healing.

I read the first few chapters in the book and almost changed my mind. I would never, ever return someone to the shelter once I had them no matter how difficult they became. But if Dusty’s soul had passed to another body, I was pretty sure this was it. That tail never stops wagging, he comes when he’s called, and he knew exactly were Dusty slept in my bed and he claimed that spot for his own that first night after we brought him home. This to the dismay of Lily, one of the cats.

The only sign of any abuse other than neglect that I’ve seen is that he won’t come near me if I have a broom or a rake in my hand.  Fortunately, that’s not too often.

His name was Peanut, a name I didn’t like for a reason that has nothing to do with pets or allergies, but he responds so positively to it I don’t want to confuse things. So, it’s Peanut. Both cats are bigger than he is and he’s bigger than Luna, but everybody is small and getting along.

Although I was worried about Peanut being too much for Luna to handle, an interesting relationship has developed between the two. When my daughter got Luna she was just days old because her mother had been accidentally killed. So Luna never had another dog to show her how to be a dog. Well, Peanut seems to be taking that role upon himself and now it’s not unusual to see them lying together in one of the dog beds scattered around the house.

Peanut is the happiest dog I know, and we couldn’t be happier to have him. I checked the story here on Ordinary Durham that I wrote a couple of weeks after Dusty made that trip across the rainbow bridge. It was almost exactly two years later that Peanut arrived here at, what the animal rescue people refer to as his “forever home.”