You are here: Home / Reflections / Why Durham: Citizens’ Financial Report 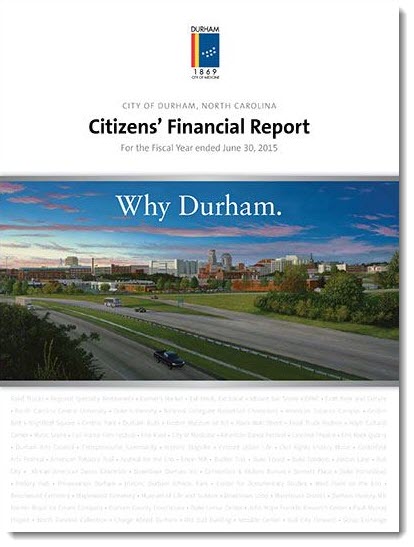 For a good many of the 30 plus years I’ve lived in Durham, the City Government was not famous for anything particularly good, with a couple of exceptions. Therefore, when I spotted among the pile of newspaper inserts headed for recycling the City of Durham’s Citizens Financial Report for the fiscal year that ended in June, I was curious.

One of those exceptions has been the city’s credit rating. As the report points out, of the 22,500 +/- cities in the country, fewer than 40 of them have the top triple-A debt rating from all three of the major rating agencies. Durham is in that group and this has been the case for some time even when some other things seemed to be in chaos.

One important measure of our fiscal health that is shared in the report is called the General Obligation Debt Ratio.  This is the ratio of outstanding debt to Assessed Valuation or the calculated value of the property available for taxation. State Statute limits cities to a maximum of 8%. For this past fiscal year Durham was at its lowest point in the past 5 years at .785% and has hovered around 1% all five years.

It also did not surprise me that Durham’s financial reporting has been winning awards for the last thirty years.  What might surprise someone new to the area is that Durham is one of the least affluent communities in the Triangle.  I’ll share more about that in another post based on an index published in the Triangle Business Journal.

Besides the numbers , I was also impressed by the report itself. In my last job in banking as the Director of Marketing for the now fully absorbed Central Carolina Bank, one of my periodic duties was to work with the Controller to produce the quarterly and annual reports of the bank.

In both government and banking, financial statements can be so full of jargon that only the pros can understand them. What I was supposed to do at CCB was to add some context to the numbers and even “spin” them for the most positive impression, which wasn’t that difficult at a well-managed bank like CCB. I had to chuckle when I found in the city’s report the most creative explanation of that task that I have ever seen. It describes it as akin to the production of a Italian Opera for an English audience.  In other words, when done right you don’t have to know the language to appreciate the art. This is a slick production that is well written and uses great graphics to help make points and increase understanding.

The final thing that makes the report interesting is that it also contains four short essays by citizens of Durham with the theme “Why Durham.” One is about the Durham Bulls, one about the transformation of our historic tobacco factories, another about the emerging History Hub and the final one about the Full Frame Film Festival.  These are just some of the things that make Durham Cool but our theme in Ordinary Durham is about things…like good financial management…that help make cool possible.

Copies of the document itself are available at City Hall or on the new city website. It’s a little hard to find there so here is the direct link . Or, if you haven’t dragged your recycling to the curb, you might find it between between the Walmart and Best Buy flyers.